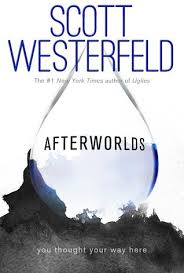 Source: received for review (thanks so much, Penguin!)

Darcy Patel has put college and everything else on hold to publish her teen novel, Afterworlds. Arriving in New York with no apartment or friends she wonders whether she’s made the right decision until she falls in with a crowd of other seasoned and fledgling writers who take her under their wings…

Told in alternating chapters is Darcy’s novel, a suspenseful thriller about Lizzie, a teen who slips into the ‘Afterworld’ to survive a terrorist attack. But the Afterworld is a place between the living and the dead and as Lizzie drifts between our world and that of the Afterworld, she discovers that many unsolved – and terrifying – stories need to be reconciled. And when a new threat resurfaces, Lizzie learns her special gifts may not be enough to protect those she loves and cares about most.

Don’t you love it when your expectations are exceeded?

As every Potterhead knows, “Exceeds Expectations” is right below “Outstanding” on the OWLs. This was both in equal measure. I did not expect to like this book as much as I did, not when a) it was getting quite a few negative reviews and DNF ratings, and b) it was so freaking long.

I’m pretty sure I saw a tl;dr review for it, even (“too long, don’t read” for those who aren’t up with the lingo…not that I am. I had to look it up on Urban Dictionary).

So this was my reaction (dedicated to Mel at YA Midnight Reads):

Basically, people told me it wasn’t good and I ended up really loving it. AND YOU MIGHT TOO.

You might enjoy this book if you are a NaNoWriMo-er, teen writer, aspiring author at any stage or interested in the publishing world.

NaNoWriMo, if you didn’t know, is this CRAZY event where writers all over the world write a book in a month. Or 50,000 words of one, at any rate. It’s a lot of fun, and I’ve participated in it twice. Darcy Patel, the main character in this novel, gets a book deal for her NaNo novel.

There are often books where the main character is a writer, but they don’t often get it right. It’s more of a poetic description of writing. This one, however, did it right. Darcy Patel acknowledges that writing is really rewriting, and spends a heck of a lot of effort rewriting her novel.

So bonus points for that.

The OTHER half of the book is her actual story.

That’s the other thing: it’s really, really meta, and satirical, and smart.

It’s a story within a story, and in both of them, there are references to other stories. It’s really self-aware, and I could see Scott Westerfeld in it. The discussions on cultural appropriation, on pen names, making fun of the “glitzy glamour” of the YA world. It was really, really cleverly written, and part of me has the feeling that a LOT of it was satire rather than taking itself seriously.

I know. My brain hurts too. But this book is so ridiculously clever it kind of astounds me. I think I would actually have to read it again to realise just how clever it is.

A lot of people have said they liked Lizzie’s perspective better.

I actually liked Darcy’s better – the writing world, the romance, the book tours. I did LIKE Lizzie’s, but I didn’t love it. With the two of them together, though, it was just so interesting. Throughout the book Darcy references the changes she has to make to her novel, and since it appears as a finished copy within Afterworlds, you get to see how she made those changes.

It’s a bit crazy, and it’s different. Not everyone is going to like it, because in some ways it’s a bit too different, experimental, whatever. But I thought it was really, really unique and clever.

Another common complaint is that it’s too long.

And I mean, yeah, it is long. It’s like 600 pages. That’s because it’s really two books in one – the story of Darcy, and the story of Lizzie (Lizzie’s story is referenced at one point at about 60,000 words – if that’s pretty much the same in the final draft, the whole book is probably around 120,000 words, which is a LOT of words).

It didn’t feel too long for me. Switching between the two stories meant there was always something interesting going on. Also, with the copy I had, the edges of Lizzie’s story were outlined in grey, so from the top, you could see how long each chapter was. Like so: 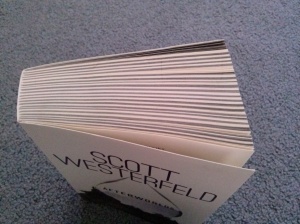 So I really liked that.

And, sure, it won’t be for everyone. And I might not have done the best job at explaining it. But this is probably one of the most unique books I’ve ever read.

If you’d like to read a review that sums up my thoughts MUCH better than I can, here is an amazing review of it.

22 thoughts on “Afterworlds by Scott Westerfeld: stories within stories”