Today I’m participating in the Teens Can Write Too blog chain for July. 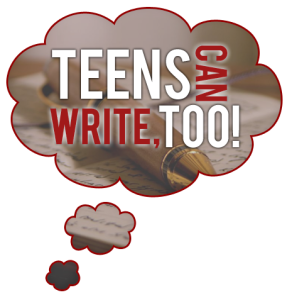 The title is a lie, people. I’m going to talk about more than one thing because I’m just multi-talented like that. Here we go.

No, really, take it from me. I am the Supreme Goddess of Writing. If I had known this when I was a tiny young writer, I would have been a lot less arrogant. No, you are not the exception to the rule. Your first draft will not be perfect. Like the rest of us mere mortals, you have to rewrite. For me, that usually means the whole novel *whimpers quietly*. Even if your first drafts are less of a mess than mine, they will need extensive revision.

Just realised I’ve used “sucks” in the first two of these. Oh well. Anyway, there is this misconception that teen writers suck at writing, which is just untrue. Any beginning writing sucks. Like anything, it takes practise. Sure, some may be better at it than others to begin with, but even those people need determination and perseverence in order to…not suck.

There is a whole community of writers out there on the interwebs.

Twitter is your best friend. Seriously. There are SO MANY writers on Twitter it’s not even funny. And I’ve learnt a bunch from other writers. Whether it’s from pitch contests, blog posts or Tweet-sized tips on writing, there’s so much there that’s helpful. I wish I’d had Twitter when I first started writing.

Writing is hard. But that’s no excuse.

It’s all worth it.

And for me, it’s all worth it.

And here are the rest of the lovely people participating in the blog chain! You should definitely check them all out. And tell me in the comments: if you’re a writer, what’s one thing you wish you knew when you started out?

24th – http://teenscanwritetoo.wordpress.com/ – The topic for August’s blog chain will be announced.

Many of my friends and family live diverse lives. Yeah, I have the cis-gendered, heterosexual, white and able friends/family, but also those of different backgrounds, sexualities, gender identities, ethnicities and abilities/disabilities. So my writing reflects that. Here are some examples.

In The Daisy List, the main character’s mum suffers from cancer. Her best friend Kevin is half-Taiwanese, and her friend Niff has African heritage.

In The Ballerina Painting/ Blind Spot, there are two main characters. William is blind, and white. Ashley is deaf, and Indian. One of their friends (I can’t even remember her name!) is a lesbian.

In Wanderland, the story I’m plotting right now (the name might change), Alice is Asian and is paraplegic, meaning she gets around in a wheelchair.

I’m not listing these things so I seem all noble or anything (although that’s true as well).

Most of the time, these characters occur to me as they are – I don’t change them just so that they can be more diverse.

I totally understand that writers are afraid of writing diverse characters. Afraid of offending particular groups, or not getting it right, or portraying it incorrectly. But I’ve always thought of my characters not as a product of their “diversities” but as, first and foremost, people.

My characters aren’t just deaf or blind or Indian or gay or paraplegic or sick or Taiwanese or fighting depression. They’re also complete people who live with these things, who deal with these things – often, they’re not a huge part of who they are. I mean, being white is not something I think about every day. It just is.

But as readers, we have a certain power. Readers are just as diverse as writers. If authors get something wrong in a book, we can speak out and say hey, this isn’t right. We don’t need to condemn writers for getting things wrong, because at the very least, they’re paving the way for more diverse characters in the future.

And it helps to research as well – not just to look things up on the internet, but talk to people similar to who you want to represent in your stories. That helps with authenticity. Hazel Grace was inspired by Esther Earl, but Hazel is her own character.

We are not our labels. Diverse people are just people.

And if we write them that way, that will shine out. We might get things wrong – I’m sure I’ve got things wrong even in this post, which I’m really nervous about. But if we can help correct and expand knowledge, then that will show in YA fiction. Hopefully.

Writers! Do you write diverse characters? How do you do this sensitively?

So my WIP at the moment is called The Daisy List. It’s getting very angsty at the moment, but I quite like it. It’s a second draft, and in past tense.

I do not understand this landscape.

And THEN, when I start on the second draft again, I accidentally switch tenses back to present. All the time.

Let’s look at some positives and negatives of both

Positives – more realistic, easier to suspend disbelief. It’s how we tell stories in real life, so this tense doesn’t jar the reader.

– more reflective. I mean, if it’s in the past, the narrator already knows what’s happened, and their reflections are often much deeper. It feels more profound or something.

– often easier to write. This is the tense most people start with, because it’s most common in books.

Negatives – can sometimes lead to telling rather than showing, and lead to recounting. This is a problem I have in my own WIP – the main character is telling her story, but sometimes it distances the reader from the actual story.

– lacks immediacy in some cases

Positives – the action is immediate. Everything happens in the moment. This leads to a closer distance between the narrator and audience.

Negatives – may alienate readers. I know some people who are REALLY put off by present tense, something that isn’t often found with past tense.

– can be difficult to write well. I’ve tried present tense a few times, and sometimes it ends up sounding really awful. In my opinion at least, it’s a harder tense to write compared to past tense.

– harder to create a suspension of disbelief. I mean, technically it’s impossible to tell a story as it’s happening, so some inconsistencies might be apparent there.

The question: which one to choose?

(loving the tension in this gif)

Really, the choice of tense depends on what you’re writing. Something more reflective might need past tense, while something needing immediacy may use present tense. Really, your choice shouldn’t depend on what other people are writing. Play around with the tenses! Try out different things! Your first choice may not be the one that you end up with.

I know that past tense definitely works better with The Daisy List, because Daisy is coming back to her experiences from an older perspective. I like that about it. There is a lot of flexibility with both tenses, so whichever one you choose, make it work for you.

Readers and writers, I want to hear from you both! What’s your favourite tense to read or write in? Writers, do you accidentally switch tenses like I do? Readers, are you turned off by a certain tense?

A lot of you will have heard of the massive November writing event, NaNoWriMo. This event is where people write 50,000 words in the space of one month. In both 2012 and 2013, I surpassed the 50k and proceeded to finish the whole first draft. Yes I am bragging, even though MANY people did way better than that.

It’s a process which ranges from this:

If you’re not a writer (I know a lot of you aren’t!), writers are weird, okay? We range between loving to write and hating it, or at least I do. Sometimes I think something I write is pretty good, and then when I re-read it I’m like whyyyyyyyyyyyyyyy did I think that was good???

But the GREAT thing about first drafts is that none of that matters. It’s going to be awful anyway, so why spend a long time on it?

I haven’t written that many first drafts, or not proper ones, anyway. Three were the result of a NaNo period – two during the Novembers and one during Camp NaNoWriMo July last year. The fourth was during two months before November, where I wrote about a thousand words a day, give or take.

And even at that kind of pace I’m all like:

^^^In fact I think this dude has the right idea.

But if I’m not pushing myself like that, I really tend to lack motivation. The second draft I’m working on now? Yeah, I started it at the end of 2013 and have written 33,000 words.

That’s okay! I’m happy with my progress. Because it’s not a first draft, it’s bound to take longer.

I think it’s important not to think too much during a first draft. If you start overthinking, you start censoring yourself – some of my best ideas seemed stupid to start with before I fleshed them out and they became things I still really like. Reading first drafts back is not fun. It’s actually kind of scary.

There is such a big different between each of my drafts, and I know that each one is better than the last. I also know that some people like to draft slowly, while others prefer to do it quickly (or ridiculously quickly, like a certain someone I know whose name I will not mention *cough*CAITDREWS*cough).

How long does it take you to write a first draft? I’d love to hear from you! I mean, maybe I’m doing it wrong. I’m not sure there’s a wrong way to write, though.

Today I’d like to talk about tropes in YA fiction (hence my title). Have you noticed that lots of people in YA books have green eyes and/or crooked smiles? I mean, even Augustus from The Fault in Our Stars has one of these smiles. How does it even work? 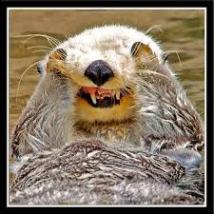 Of the many many people in our world, I’m pretty sure 99.9435% of the green-eyed ones live in YA books. What’s up with that? There’s probably a point to be made about diversity here, but I’m not going to go into that. I want to talk about originality.

I’ve got this weird thing about one-word titles. To me, they all sound the same. They sound like the same genre, the same tone, the same style of writing, the same overused cliches like green eyes and crooked smiles. Of course, this isn’t the case: I’ve just had bad experiences with those kinds of titles in the past. But one-word titles provide a nice metaphor: the fact that YA books, recently, tend to fall into nice neat boxes, usually with some romantic love tossed into the mix.

There are more cliches, of course: the Bitchy Cheerleader, the Douchebag Jock, the Ordinary Main Character Who Turns Out To Be Extraordinary, the Love Triangle…there are so many.

Don’t get me wrong. There’s a reason they’re tropes – it’s because, if they’re used right, they work well. I’m fully prepared to read about a love triangle if it’s done well.

Then other times I kind of…

There is SO MUCH to write about when you write for teens – so much that we are all experiencing. Why stick to tropes? Make your own story. I assure you, us teens won’t begrudge the lack of green eyes and crooked smiles.