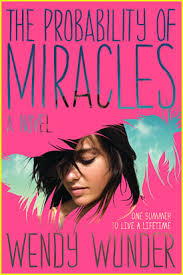 Title: The Probability of Miracles

Dry, sarcastic, sixteen-year-old Cam Cooper has spent the last seven years in and out hospitals. The last thing she wants to do in the short life she has left is move 1,500 miles away to Promise, Maine – a place known for the miraculous events that occur there. But it’s undeniable that strange things happen in Promise: everlasting sunsets; purple dandelions; flamingoes in the frigid Atlantic; an elusive boy named Asher; and finally, a mysterious envelope containing a list of things for Cam to do before she dies. As Cam checks each item off the list, she finally learns to believe – in love, in herself, and even in miracles.

A debut novel from an immensely talented new writer, The Probability of Miracles crackles with wit, romance and humor and will leave readers laughing and crying with each turn of the page.

Before I tell you my thoughts on this awesome book, let me share a few of the other book covers (because book covers are awesome). 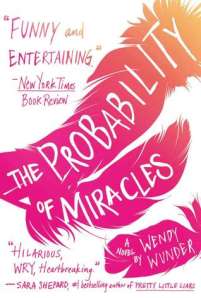 I just thought they were all really pretty. Plus, the one on the left (which mean “Flamingos in the Snow” or something just as strange) is German and I absolutely love the cover. And I’ve been wanting to read this OTHER one of Wendy Wunder’s for ages: 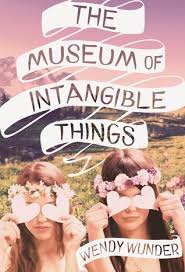 Anyway, I’ve blabbered enough about other books. Let’s talk about this one.

Cam is one of my favourite narrators in the history of ever. She’s smart and SO sarcastic I actually laughed out loud several times. But you can tell she also really loves her family beneath it all. And she’s not afraid of being herself – she loves dancing to get in touch with her Samoan culture, and is often brutally honest. She’s not perfect but that’s what makes her such an amazing character. There is a LOT of black humour in what she says – things you maybe shouldn’t be laughing at, but you do anyway, because that’s how Cam comes across.

She’s also witty and has some of the best dialogue I’ve ever seen in YA contemporary.

The rest of the characters are also really strong. The best word to describe them would be quirky, and they’re all quirky in their different ways. Wendy Wunder has an absolute gift for writing fantastic characters.

Then there’s the town of Promise. They move there in the hopes that the town’s supposed “magic” will cure Cam’s cancer. Cam doesn’t believe in any of that, but weird things happen anyway. LIKE FLAMINGOS.

(I just had to put this GIF in…I really did. FLAMINGOS ARE SO RIDICULOUS)

Anyway, Promise had more amazing characters and the magic of the town was captured really well.

This is a book that contains cancer, but like The Fault in Our Stars, it is not a Cancer Book. In fact, it’s waaaay funnier than TFIOS in my opinion, simply because of the awesomeness that is Cam. There are sad bits, though, and it gives the book a light and shade that’s really amazing.

Also there’s our good friend Asher, who complements Cam’s sarcasm very nicely. The best part about him was how he kept on turning up unexpectedly and causing Cam to absolutely flip out.

The ONLY quibble I have is that it was a little slow in the beginning.

But by all means, you should read this book. It is fantastic. That is all. The best thing about library books is that often you go in without knowing much about the book, and sometimes you discover gems like this one that you wouldn’t have found just through review books or ones that you buy yourself. LIBRARIES ROCK.

10 thoughts on “The Probability of Miracles by Wendy Wunder: Mostly About Flamingos”