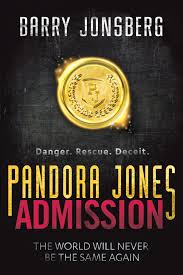 Published by: Allen and Unwin

Pandora Jones wakes in an infirmary – her body weak, her memory providing only flashes of horrific scenes of death. She soon discovers that her family has succumbed to a plague pandemic which almost wiped out humanity. Pan is one of the survivors who have been admitted to The School – a quarantined, heavily guarded survival-skills facility – to recover their strength, hone their skills and prepare for whatever comes next. Pandora’s skill is intuition, but how useful will it be outside the secure walls of The School? And what if it leads her to question where the truth lies…

Unfortunately, I wanted more with this one.

The concept was intriguing enough. I was interested about The School, and the disease that had wiped out most of the population. And some of the activities were fun to read about.

I liked Nate as well, but he was pretty much the only character I liked. Pandora Jones, our protagonist, felt a bit bland to me, and none of the other characters were very likeable.

It also fell into what I call the Dystopian Trap. As in, not enough answers, and vague explanations for the world that we’re reading about. The pacing was also quite slow, and I found myself skimming a lot of it. It didn’t seem to be GOING anywhere – the survival training of The School wasn’t particularly interesting to read about.

The dialogue was also a little bit unrealistic – nobody talks in the formal way these characters did.

A shame because I really liked Life as An Alphabet by the same author.

The good thing about this one was that I DID want to read on, if only to get some answers.

Published by: Allen and Unwin

Source: received for review (thanks, Allen and Unwin!)

Blurb: *WARNING* spoilers for book one

Pandora and her team are already two members down. The survival of humanity in the post-plague world depends on them. But who can she trust?

It was difficult to know when nightmares ended and the waking world began.

Pan is still struggling to distinguish between her dreams and reality. When she wakes in the Infirmary her mind replays the sight of Nate running along the shoreline and the way his body froze and then flopped after he was shot. But her memories hold more questions than answers and she doesn’t know who to trust.

When she forms an unlikely alliance with Jen to try to make sense of everyone’s haunting similar memories and the conflicting information about The School, she finds herself with unexpected enemies.

Pan and Jen are determined to seek the truth – no matter what rules they must break or how terrible the danger they face. But can they even trust each other?

This one was better.

Not by a LOT, but I enjoyed it more.

There was a really awesome relationship between Pandora and Jen, for a start. After their rivalry in the first book, this was nice to see. Jen’s sarcasm basically made this book for me.

There was also more of a plot. It still dragged in the middle, but they were looking for answers at least.

I had a problem with the ending – after basically no answers for most of the book, they’re all dumped at the end without any explanation, and without making much sense. So that was a little annoying.

I’ve never been the biggest fan of dystopians. There’s always something lacking for me – with some exceptions, of course. And I feel like this is one of those series. All that said, however, I do want to read the third book to find out what happens with The School, Pandora and Jen – and find out what really happened to Nate.

Overall it’s a clever series with diverse characters. It’ll have you rushing through to find out what’s really happening at The School.

Is anyone else annoyed by the whole “not explaining” thing that’s so common dystopian?